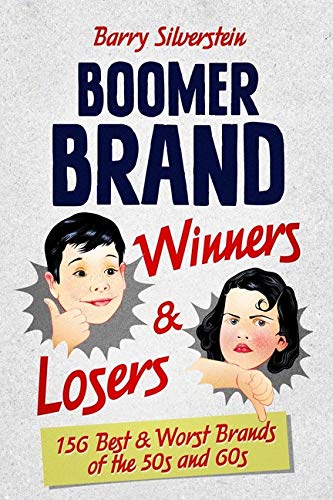 This remarkable book features fascinating stories of 156 best and worst brands of the Boomer era.

Does Your Favorite Childhood Brand Get a Thumbs Up?

Take a walk down memory lane with Barry Silverstein's latest book, Boomer Brand Winners & Losers. Revisit 156 brands, some that are still flourishing today and some that have long been forgotten. Just don't get mad at the author if he happens to give a thumbs down to a brand that was a favorite in your youth! Below is an excerpt from the book, which is now available on Amazon.

When we think of “technology,” it is likely to be in the context of information technology, biotechnology, or perhaps environmental technology. None of those technologies existed in any meaningful form in the 50s and 60s.

But technology was very much a part of the lives of Boomer kids – it was just different kinds of technology. The most enticing technological advancement was television (and eventually color television). However, there were other thrilling innovations, such as the 45 rpm records that created a market for “single” hits, and transistor radios, which made it possible for kids to carry around radio stations that played their favorite rock ‘n’ roll tunes.

Magnetic tape came into its own, affecting Boomers in two ways: On the video side, television shows could be recorded on tape instead of film; by 1963, “instant replay” became a
feature of sports events. On the audio side, the 8-track tape made it possible for teens to play their favorite albums in their cars (even if the tape jammed every now and then). That was followed by the equally unreliable cassette tape.

Technology was changing in the world around Boomer kids as well. In 1959, the first commercial plain paper copier introduced by Xerox revolutionized the duplication process. Also in 1959, two patents were granted for tiny electronic circuits known as “microchips,” the core of just about every technology device we use today. Jet airliners began to fly domestically and internationally in the 50s.  The 1957 launch of the first U.S. satellite ended in failure, but it would foreshadow future space successes, including astronauts landing on the moon in 1969.

Commercial computers appeared in the 50s, but the first personal computer did not come along until 1975 – and even then, it was in the form of a kit. The early 60s saw the introduction of the IBM Selectric typewriter, the invention of the laser, and the first use of a factory robot. The first computer mouse was invented in 1964 and the earliest version of video games appeared in 1966.

The Boomer era brought with it technological changes of great significance, even if the Information Age was still in its infancy.

Boomer kids (and their moms) sure liked talking on the telephone. Not to be sexist, but it was largely adolescent and teenage girls who burned up the telephone lines, spending hours chatting with their friends. A prized birthday gift for a Boomer kid was getting his or her own phone (a land line phone with a physical cord was the only option back then). Of course, conversations with a boyfriend or girlfriend often had to be conducted in the privacy of a closet! Telephone technology kept up with our communication needs. In 1959, the Bell System’s “Princess,” brilliantly targeting women, featured a low-profile design, a light-up dial that functioned as a night light, and a remarkable range of colors. It was the perfect accessory for any bedroom. In 1963, a revolutionary technology known as “dual-tone multi-frequency” was introduced by Bell under the name, “Touch-Tone.” How exciting it was to push those buttons and here the different tones! It took twenty years for Touch-Tone technology to replace rotary or pulse dialing, but push-button phones eventually became a worldwide standard.

Debuting in 1939, the “View-Master” was a stereoscope device that used cardboard reels with pairs of photographic images that appeared to be three-dimensional when viewed. It became popular with Boomer kids in the 50s after View-Master acquired a competitor and gained licensing rights to Walt Disney Studios. Throughout the 50s and 60s, newer, more streamlined versions of the View-Master were introduced, including the first plastic model in 1962, along with an ever-increasing line of reels. When GAF bought the company in 1966, the reels appealed to Boomer kids by relying on tie-ins with cartoon characters and television shows. However, the decades-old technology was aging; it could never really compete with color television and the movies. GAF tried to keep View-Master vibrant by introducing “talking” models and projectors in the 1970s and 1980s. In an effort to maintain brand relevance, Mattel, the current owner of View-Master, teamed with Google to produce a “View-Master Virtual Reality Viewer.” A movie based on View-Master is also being considered. Really?!