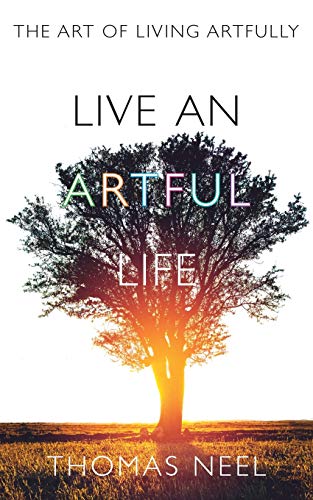 Live An Artful Life: The Art of Living Artfully

Through an appreciation for inspiration and creativity, career fine artist, Thomas Neel, using his 30 years of personal experience, passionately guides you through the lasting benefits of happiness, self improvement and stress relief found in living artfully.

Life can be mundane if you allow it to be. The good thing is it doesn’t have to be. It just takes one simple change to truly live artfully, and that’s being carefree.

Carefree doesn’t mean being reckless and not caring about anything. The essence of the word carefree is happiness. Is there anything more important than happiness?

Being unhappy is stressful and stress makes you sick. Being happy is the essence of feeling great about life. Feeling great about who you are as a person, your family and friends, your social interactions in general, and with humanity overall.  There is nothing in this world better than feeling happy and or making others feel happy, which in return of course, almost always leads to more of your own happiness!

Carefree is not careless. Quite seriously, it’s anything but. Life needs to be taken just a little less seriously in most areas. If you look at our lifestyle in the United States, it kind of goes like this: we see ourselves as productive; we work hard and pressure-cook ourselves to the point of over-scheduling; we allot very little time for rest (we even do this socially). Then we bombard ourselves 24/7 with information, to the point where our brains are just battered. But that’s not enough. We then beat ourselves to a pulp with social media and a zillion (mostly meaningless) little text messages and emails. In the process, I believe we’ve actually become less social, not more. Our communication is like make-up, it’s a surface effect, not a sub-dermal, get-to-the-heart-of-the-matter one.

If you go to a museum and look at people looking at art, they silently stand or even sit in front of an image. Their breathing is normal, as is their heart rate. The message of that art becomes their own interpretation of it and it pours into them naturally like liquid through a funnel. Even if the image is unsettling, the brain is able to modulate its acceptance of what is happening and process the information.

These days, much of what our brains take in on a day to day basis is thrown at us. It is not as though we are walking down a sidewalk, peacefully looking around or even up at a soft blue sky, when a person comes along and we stop for a nice conversation. Then, as we move along, we have time to process our discussion. No, we are more likely looking at our phone, late to get somewhere and thinking about our over-scheduled lives. A text comes in as we are reading a plethora of email and wondering who is getting the kids to the next sports practice. We know there’s little time for anything, much less time to process all of the information of any conversation.

So a version of fun is relegated to wine while making dinner, a short vacation once a year… where you likely spend some of your precious hours on the phone, working.

To live an artful life, you need to refocus you on the greatness around you! To slow your pace, you must reset your pace.

In a recent conversation with a friend, he told me that I had been on his mind. He knows me as an artist, and he doesn’t think of himself as being creative, but he told me he took up doing paint-by-number paintings. I told him that’s great! In very little time, he moved to buy better brushes and is enjoying the experience even more. But the main thing he enjoys is how his mind just drifts away as he finds himself engrossed with it for hours. How do you think his heart feels about that? Wonderful, I’m sure.

I have another friend who comes home from work and pretty quickly moves to put a puzzle together. All of them now are at least 1000 pieces and he goes through them at a rate of about one per week. In a sense, this is a bit like painting in that he sees the image develop in front of him. It’s his mind and hands working together, processing things slowly, and it’s fun. His heart is now beating normally, he is not being bombarded, and he moves at his relaxed natural pace.

Live - Not to just exist, not just the time between birth and death, but to live and experience life. An - Indefinite and limitless!

Life - Again, not to just exist, but to possess the capacity to grow!

"Song of the Shenandoah” by Thomas Neel. Image is subject to Copyright.

After a decade in the specialty automotive industry, THOMAS NEEL undertook a major life-change and became a fine art painter. His new book Live An Artful Life spans Neel’s 30-plus years of experience as an accomplished artist with over 40 one-man shows to his credit. Having been a gallery owner, involved in fine art publishing, an educator and writer he has also written a monthly newspaper column called “The Artist’s Perspective” for 10 years. Along with his wife, Linda, Neel founded Live An Artful Life® Inc in 2008. He has written two other limited-edition books and produced two short films. He was also the creator of the 30th and 40th Anniversary paintings for the award-winning The Inn at Little Washington located in Washington, VA. He and Linda currently reside in Denver, NC.

Learn more about Thomas Neel and subscribe to his blog at https://www.thomasneel.com/ Artistic
The Power of Storytelling