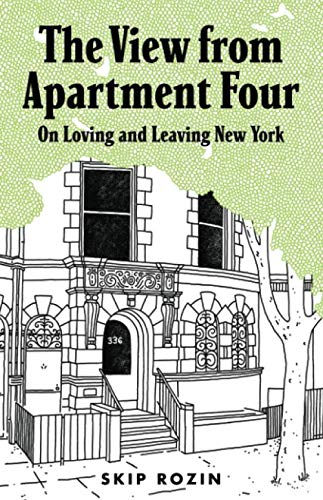 The View from Apartment Four: On Loving and Leaving New York
When Best Laid Plans Become Triplets
By Skip Rozin

New York was a great place to be single, straight and male in the second half of the 20th century. There were all kinds of women, smart and attractive and interesting, older women and younger women, local, from all over this country and most others. If a man wanted company and could put a subject and a verb together to form an intelligent sentence—in any language—there were plenty of choices.

I am talking about the ‘60s and the ‘70s, so there was no fear of AIDS and most women were on the pill, making sex easy and fun. Many were also confidently gregarious; an occasional knock at my apartment door initiated an unexpected evening of social contact. And without expectations, let alone talk of marriage, which was fine for me as I was terrified of marriage, of the commitment and responsibility, emotional and financial.

This situation proved most agreeable for me, a struggling writer maneuvering myself in and out of relationships. Then came that unexpected September night on the French Riviera. A friend, a lawyer with business dealings all over the world, invited me for a week-long vacation.

We were cruising along the Cote d’Azur on a client’s 96-foot motor yacht and had put in at Saint-Tropez, famous for enticing women to go topless on its glistening beaches. A late dinner on deck was finished; everyone else had gone to their state rooms. I lingered over one last cognac, and remained to watch the parade of tourists walking along docks.

The deck was quiet and, out of the glare of lights from the shore, cast in shadow. I took that time to appreciate where I was: on the French Riviera, drinking fine cognac aboard a yacht. This was very nice; there was talk of extending our stay a day or two.

Suddenly there came an odd feeling, a questioning of my joyful circumstance. In the next instant it came to me: I could come and go as I pleased because nobody relied on my being back home. Good as this was on one level, it indicated a lack of responsibility to anyone but me. In the quiet of that night I saw my life played out as lyrics in a country song, how living free meant having nothing of value to lose. I doubt that the temperature dropped at the moment, but a shudder ran through me.

This was 1981 and I was about to turn 40. Maybe that was the stressor, the stimulus that made me look critically at my situation. Focusing totally on my own needs hadn’t seemed selfish before, but approaching 40 I found myself challenging it. And as I looked down the road toward 50 and 60 it seemed even less attractive. I warmed the cognac in the large, crystal snifter, lifted it to my nose and inhaled the aroma. Maybe I should re-think my course. And so I did.

Instead of looking at women as potential dates, I began seeking a woman with whom I might share a life. I didn’t need to look far. I had already met Julie through mutual friends, and we connected from the start. I found her smart and attractive. She was a marvelous illustrator, though she dismissed her artistic talent as a facility and went on to earn a master’s from Yale’s school of photography. That determination looked to me like independence, a quality that would serve us both well as I was committed to my own professional path.

The only real issue was that Julie wanted children. While being a parent sounded good in theory, it was for me one of those someday things, something other people did; you know, adults. Marriage did not seem so risky, but parenthood was scary. And yet here I was, seeking a fuller life, one focused less on myself. But the woman I wished to marry wanted a child. Eighteen months of twice-a-week psychotherapy convinced me that men had been getting married and starting families for a long time and few had died from it.

I proposed marriage to Julie; she accepted and we married in 1983. Our first child, Rebecca, was born in October of 1985.

Rebecca was a take-me-anywhere kid. At one party she happily played on the floor for a time, somehow avoiding the feet of the adults. When she tired we laid her on our host’s bed, surrounded by the guests’ coats as a barrier from rolling off. She slept, even as we picked her up and carried her home to her own bed.

Those were good years for all of us as a family. Then in 1987, when Rebecca was two, Julie introduced the subject of a second child. I was—what’s the expression? — taken aback, but I dismissed my anxiety. After all, we were just having another kid, probably like Rebecca, fun and easy and giving joy.

All the while, a subplot was percolating. Julie at 33—I was 43—had trouble getting pregnant with Rebecca; we finally sought a fertility specialist who prescribed Clomid, a drug he insisted was safe, euphuism for having a low risk for causing multiples. Sure enough, after one dose and timing our efforts to Julie’s ovulation schedule she got pregnant. Now three years, one miscarriage and six months of failing to conceive on our own sent us back to the specialist. Again he recommended Clomid. This time it took two doses—one for each of two consecutive cycles—for Julie to become pregnant.

Somewhere around the 12th week we were told to schedule a sonogram; strictly routine, something about high hormone levels.

The procedure was done in an out-patient office of Mount Sinai Hospital, about 100 Street and Fifth Avenue. While Julie was being examined I read “Cinderella” to Rebecca. All around us the dearest of hopes were being realized. Women, most of them accompanied by their husbands, filled every chair of the waiting room. One by one they were summoned to be examined and then, moments later, their husbands were called in. Before long the pair emerged, smiling, hands usually clasped, reassured that everything was progressing normally.

Couples entered the office and left. Rebecca and I sat and watched as the drama played on. We waited as 15 minutes became 30 minutes, then 45. I plodded through “Cinderella” a second time, but my mind was not on the words. Something was going on behind that closed door. I reached inside for inner strength and found very little. What I did find was a desperate longing to be somewhere else.

Rebecca was growing restless; I was fighting anxiety. My mouth was so dry I could hardly speak; my heart pounded. And then, while I am not religious I issued a silent prayer: “Please God, let Julie be O.K…and don’t let it be twins.”

Finally a nurse came out of the examining room and motioned for us to follow her. The instant I saw Julie lying on that table, saw the expression on her face, I knew something was up. She reached over and took my hand. Her palm was cool, her stare fixed. And then she said, “It’s triplets.”

I could feel the blood drain from my face, my legs weaken. I have no idea what I said or what else was said to me. I remember a doctor coming into the room to confirm the readings. He moved the sensor along Julie’s belly and analyzed the ghostly impressions on the little screen before us, counting aloud: one, two, three dark sacks. He said there was a fourth shadow but assured us that it was only a blood clot. Medical humor!  I did not even blink.

Skip Rozin is the author of The View from Apartment Four: On Loving and Leaving New York. A journalist with 50 years of experience, on staff and as a freelance reporter, in wide-ranging roles. From 1986 until 1990 he edited The Hunter’s Whistle, a newspaper about gun dogs for The American Kennel Club; from 1997 until 2000 he worked as a writer and television producer for ESPN’s SportsCentury series. Rozin’s travel articles ran in The New York Times from 1976 through 1985 and the Washington Post from 1984 through 1990. He has also worked as a reporter in the field for Time Magazine. His general readership articles, covering such subjects as the use of anabolic steroids, strip mining in Eastern Kentucky, the devilish behavior of coffee vending machines and raising triplets have appeared in the Wall Street Journal, Harpers, Parents, Audubon, BusinessWeek and more than a dozen anthologies.

To connect with the author, please visit his website www.skiprozin.com.

The View from Apartment Four: On Loving and Leaving New York is available in Trade Paperback and eBook at bookstores nationwide and online retailers such as Amazon.com and Barnes & Noble.